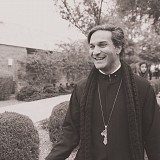 Very Reverend Chris Salamy was born in 1972 to Lebanese-American parents in the small rural town of Whitesville, West Virginia.  Fr. Salamy was baptized in the Holy Orthodox Church and was raised in Charleston, West Virginia until 1985 when his family relocated to Los Angeles, California. His passion is the study of the Holy Scriptures and foreign language. He was married in August, 1998 to Allyson Marie (Raya) Salamy in Los Angeles, CA and has two daughters, Sophia Renee and Amelia Claire. He was assigned as the Youth Director of St. Elijah Antiochian Orthodox Church in Oklahoma City, OK in October of 1998 where he was ordained to the Holy Diaconate in February 1999 and to the Holy Priesthood in March 1999.  He holds a Bachelor’s of Arts degree in Philosophy from Loyola Marymount University, a Master’s of Divinity from Holy Cross Greek Orthodox School of Theology and a Doctorate of Ministry from Pittsburgh Theological Seminary. Fr. Salamy was assigned to the pastorate of St. George Antiochian Orthodox Church in Phoenix, AZ in December 1999 and he remains as pastor to this day.